Glaucoma is 2nd leading cause of blindness all over the world and we have 1.8 million glaucoma patients in Pakistan. The purpose of this project was to develop algorithms for early detection of  glaucoma. Our main objectives were development of algorithms for detection of glaucoma, collection of data sets for validity of these algorithms, incorporating the algorithms into a system for proper use of doctors and making a low cost retina screening system. We made collaboration with Armed Forces institute of Ophthalmology (AFIO) who helped us in data collection of local patients, trials and validity of algorithms. In order to diagnose glaucoma, doctors use fundus and OCT cameras which are very costly and having price more that 4 million PKR. So, we have also developed a low cost mobile mount based system which gives initial screening of retina. The system comes with a mobile application to view retina and do basic processing. The developed algorithms are made part of a complete software system named ALBASR. AL-BASR Ophthalmology suite is a complete solution for any eye hospital/clinic. It is an electronic patient health record system that is designed to accurately capture the state of patient at all times. It works in a networked environment with other AL-BASR diagnostic software applications to fully digitize and centralize patient health record management. Enables consultant’s wireless access from anywhere and anytime on portable devices and fixed stations. It allows for an entire patient history to be viewed and retrieved without the need to track down the patient’s previous medical records by providing easy search. Equipped with image processing tool kit, it enhances fundus photographs of all types. With a built in support for early detection of Diabetic Retinopathy and Glaucoma it brings effected patients to consultant’s notice. AL-BASR data statistics monitor’s activity to help an administration focus on resource planning to improve their efficiency.

The proposed Hybrid Computer-Aided-Diagnosis (H-CAD) system has two main modules i.e. Fundus and OCT modules. The Fundus module analyses the changes caused by glaucoma on the outer layer of eye’s posterior part. The analysis of fundus images has been done in two distinct ways. In first method, three structural features i.e. Rim-to-Disc Ratio (RDR), CDR and cup shape have been extracted from optic disc. In the second method, 115 textural and intensity based features have been extracted by assessing the overall appearance and texture of sharply cropped ONH part of the fundus image. Texture features extract a unique image pattern from image which can be effectively used for classification of glaucoma. In both methods of fundus module analysis, the SVM classifier has been used for the classification. Whereas, in OCT module, Spectral Domain OCT (SD-OCT) images have been used to capture changes induced by glaucoma to the internal layers of the retina. The vertical cup and disc diameter has been calculated by identifying cup and disc margin by using the internal RPE layer of the retina. The vertical CDR is then computed and the sample is labelled as diseased or normal on the basis of the CDR value. The proposed system relies on triple synthesis of three diverse systems for the decision making. Primarily, we rely on the analysis of OCT module, which is highly sophisticated and most modern method of diagnosing glaucoma. The two fundus modules assist in the decision making. When a case is diagnosed positive by using OCT module and one of the fundus modules also provides the same result then the case is confirmed as glaucoma. However, if none of the fundus modules conform to the findings of OCT module, then the case is treated as a suspected one. Likewise, the case is treated as normal if an OCT module fails to detect glaucoma and one or both the fundus modules match the result provided by an OCT module. Figure  shows a flow diagram of proposed H-CAD system for screening of glaucoma. 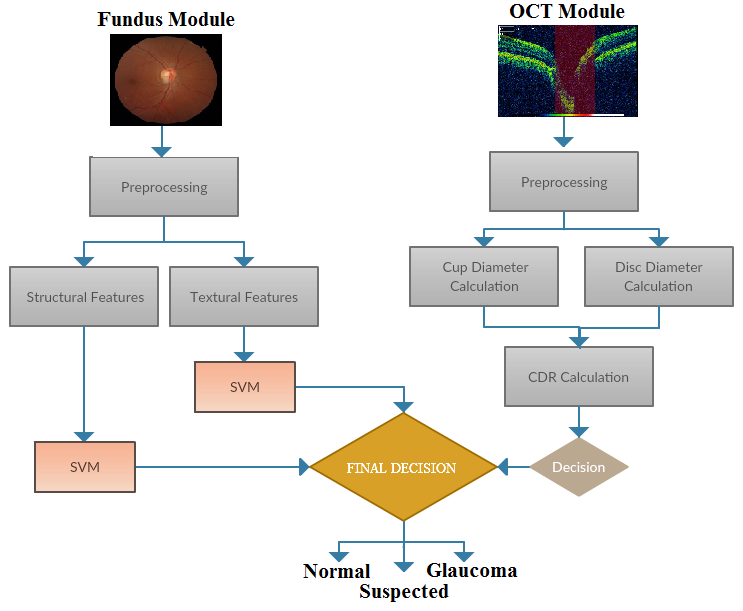 The algorithms developed have two main modules which analyze fundus and OCT images separately and then combined their results. Our algorithm for fundus contains hybrid structural features (HSF) and hybrid textural features (HTF).  HSF and HTF are the two core modules of the proposed system. The HSF module further includes CDR computation, Vertical Rim to Disc Ratio (RDR) calculation and cup shape analysis from the Enhanced (Enh) Image. Three structural features (–) are calculated and used for classification in HSF module. Whereas, HTF module consists of two sub-modules; first sub-module includes rim vessel extraction and computation of texture features from extracted rim vessels and second sub-module consists of the formation of feature set based on texture and intensity-based features extracted from automatically cropped OD part of Enh image. In HTF module overall 115 texture and intensity based features (–) has been extracted for classification. Both modules use SVM along with radial basis function (RBF) for classification. Results from HSF and HTF module are correlated to make a final decision. The final determination also includes a third class known as suspected class. If results of both modules do not converge on a single decision than sample is classified as suspected.

Portable device for acquisition of retina

80% blindness is avoidable, if it is detected and treated on time. In Pakistan, 480 people are developing eye problems every day. 90% of these patients belong to rural areas. However, due to the poor eye care facilities, many people suffering from eye problems and diseases led to blindness. The equipment used to diagnose eye diseases contains fundus cameras, which are very expensive and small hospitals cannot afford them. Although Govt. of Pakistan has developed basic health units (BHUs) in rural areas but they lack specialized equipment. Patients from rural areas need to move all along to major cities and hospitals for examination. Telemedicine is one of the solution for this problem but that too need availability of equipment to examine patients. Smartphones, as an alternative to fundus cameras, can be used for basic retinal screening.  Different products are available in market for this purpose ranging from USD 300 to USD 1500.Shipping cost and customs taxes are addition of these. These things motivated us to go one step further in our project to provide a low cost, easy to use and readily available indigenously developed product for retina examination, which can be placed in BHUs as well.  Our product includes a smart phone device working on indirect ophthalmoscopy principle accompanied with smartphone app that is cross-platform compatible. It also incorporates cloud for data storage and sharing. 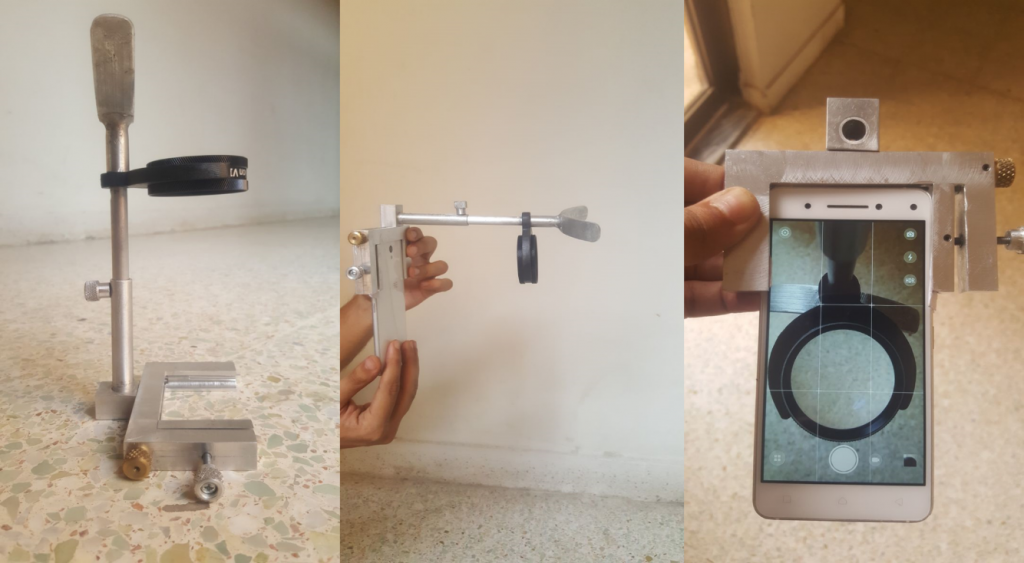 The fusion of classification results of both modules has given improved results with 96% accuracy and 100% accuracy for glaucoma referral. The improved result of H-CAD system demonstrates the effectiveness and power of integration of both modalities for the accurate and reliable diagnosis. This rigorous analysis of internal and outer retinal layer ensures that no glaucoma affected case remains undiagnosed. Hence, in rural areas where there is a scarcity of ophthalmologist, the proposed system can be used for glaucoma diagnosis and only genuine cases can be forwarded to the specialists for further examinations.

The contributions of the research performed in this project are summarized as follow:

Other than research contributions, this project also include development of a software to support the algorithms and we have also designed a low cost retina acquisition device.